Winterlude, a festival that once started as an idea to pay tribute to Canada’s northern culture and climate was founded in 1979 by the National Capital Commission. 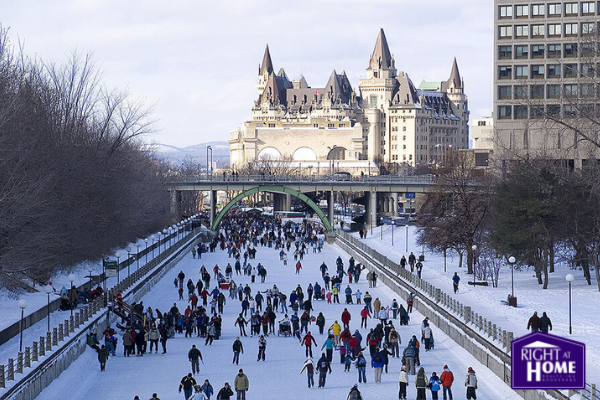 The event has now grown to an annual festival that spans over three weeks, with the attendance for the festival averaging around 600,000 people each year.

Since its founding and growing popularity over the years, the festival is organized by the Department of Canadian Heritage and run by volunteers. With it becoming one of Ottawa’s biggest tourist attractions and setting an attendance record of 1.6 million visitors in 2007, it requires an average of 800 volunteers to pull off the festival each year.

We will be breaking down all aspects of Winterlude and it’s 42-year-old traditions for you, from its unique founding and history, all the way to the festival’s main attractions and what to expect when attending.

One of the many things that draws visitors to this festival each year, would be the iconic Rideau Canal Skateway. Measuring out to be 7.8 kilometers (5 miles) it is the largest skating rink in the world. The Skate Way in 2019 had 1,493,524 visitors, a new record, showing the growing popularity the festival continues to achieve year after year.

Aside from the world's largest skating rink, the festival also provides visitors with the chance to visit the Crystal Garden held in Confederation Park. The Garden hosts the ice sculpture competition along with an ice lounge and musical concerts for visitors to enjoy.

A unique attraction that the festival has to offer takes place across the Ottawa river at Jacques-Cartier Park in Gatineau, Quebec. Nicknamed the Snowflake Kingdom, the park turns into a snow wonderland during the festival, that has ice slides and sculptures for all ages to enjoy.

What To Expect When Attending Winterlude

With Winterlude being not only one of Ottawa’s biggest tourist attractions but also Canada’s too, it is reasonable to think that planning travel and accommodations ahead of time is a wise decision. The upcoming festival will be held from February 4th through the 21st in 2022. Majority of the festival activities are free and take place in the urban Ottawa-Gatineau region.

If visiting the festival or Canada for the first time, knowing just how cold it will be can help you prepare and be ready to enjoy the festival as much as possible. The average temperature in the month of February is an average high of -4.9 Celsius (23.2 Fahrenheit) and an average low of -13.3 Celsius (8.1 Fahrenheit). So, be sure to pack warm and comfortable attire for the trip to Winterlude.

For more information about the Winterlude festival or interested in volunteering visit the official website in the link below.